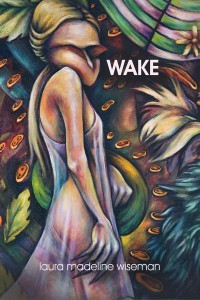 Wake by Laura Madeline Wiseman transforms the grim reaper into a female, a cart driver with a passenger, and a character of intrigue. She is both a gentle friend and an aggressive enemy; she is a migrant of souls.

Fairy tale and mythology is a mere starting point to Wiseman’s Death — for Wiseman is far more interested in the tensions of the feminine/feminist and the sensual/sexual. Death is a symbol of Society, not the end of Individual.

To keep her readers engaged, Wiseman takes unexpected and well-executed turns in her design. Take, for example, “Considering The Little Mermaid“, which ends:

who worked in soul trade, a matter of contract,
signature, bind — all of us with no one else to turn to —

were who we turned to, a pale fiery gaze of promise.
Take the gulp, she said and, you’ll have your man.

A bold and daring project, Wiseman as usual delivers, taking her readers on a journey that is both familiar in theme and focus, yet challenging and intellectual in its retelling.

Wake is 67 pp and published by Aldrich Press.