Appalachian Symposium was a great success!

I am not new to Appalachia. I was born in western mountains of Virginia (though my family moved the next day, a story for another time), and I spent my college years and the first two years of married life in western North Carolina. But it is safe to say I know little about the history, culture and issues that Appalachians are faced with.

I received a crash course from attending a writers program. Perfect.

The Appalachian Symposium was conceived and organized by Silas House, someone I had never heard of until I moved into eastern Kentucky. But he is a prominent and important contemporary figure of Appalachian issues. The symposium was held at Berea College, and was completely free. 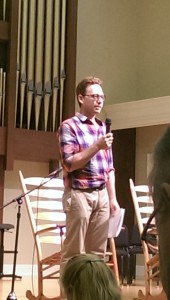 In fact, I did not know any of the writers who presented by their work, and had only heard of a couple of them before. Now I have a handful of poets and their works I want to get to know.

The Appalachian Symposium was organized like a smaller version of AWP (it has always seemed bizarre to me that a national convention like AWP is attended by a building full of introverts!), with a specific regional focus that bleeds into universal truths about writing.

Indeed, Maurice Manning, the keynote speaker on the second day, questioned where the line is that is drawn between Appalachian writing and not.

There are some great tweets out there under the #appalachiansymposium hashtag that highlight some great moments of the Appalachian Symposium, so I won’t go into any of that here. But I will end with a note of gratitude both to Silas House for organizing this wonderful and educational convention of writers, as well as to the canon of Appalachian writers throughout the centuries that have enriched the American literary scene as a whole.