Mothers Ask ‘May I’ Too

There was a time in my life when I wanted to climb the corporate latter, at least, the organizational one. I was willing to do this because it meant more money.  Meanwhile my wife spent many of those years as a full-time mother. I say “full-time mother” instead of “stay-at-home mom” because motherhood is a job, whether you enjoy parenting or not. And it requires two shifts a day. When I came home from work during our kids’ early years, my wife was “off duty”.

Fifteen years into the work force, I had no problem “giving up the reins” and let my wife be the one who was working. She was stuck at home, with no real social life, and several attempts at starting something part-time at-home all failed to stick. 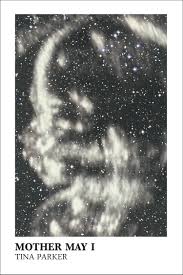 And so when I read Mother May I by Tina Parker, every memory of parenting those newborns and toddlers was brought up. I identified with Parker a lot as a parent.

Parker writes about the fun parts of parenting as well as the stuff parents feel they shouldn’t say aloud about raising small children. Her poems aren’t particularly musical, but that gives room for telling it like it is.

The collection is loosely divided into four parts, the dividers being a poem called “Questionnaire”. It is a fill-in-the-blank questionnaire for young women. The first time it appears, the answers a left blank.

The second time the answers are filled in

Finally the poem is a prose poem

I have two daughters. My first pregnancy ended in a miscarriage…

I love the titles in this collection. They are introductory statements, usually something one of her kids said, such as the poem “When Our Five-Year-Old Asks If There Is More Sky Or Grass”. Sometimes these titles are the poems themselves. It reminds me how poetic young kids are.

Some poems, such as “How to Get Toddlers Into the Car” both have an element of humor that makes me chuckle, but also hurts deep in my heart as I remember how hard the simplest tasks could be. In fact, there are so many poems in this collection that are complete with a 1-2 punch, such as one about a father who is there but is still absent. In this collection Parker is a mother asking “May I” too, because she writes about topics some might consider taboo, such as hurting your child  for the first time. She communicates a struggle some mothers are ashamed of, and in doing so provides an answer to her own question.

My favorite poem in the collection is “Just Like That I Have a Daycare Baby”, which starts out innocent enough

Soon the poem turns ever so slightly, but painfully, as the mother describes going to work. The turn is right around:

Everyone without kids who want to know what parenting is like should buy this collection. And those with kids as well — it is not a difficult book to read; on the contrary, it is a very enjoyable read. The poems about the joys of motherhood made me smile.

Mother May I is published by Sibling Rivalry Press.