This is Part 1 in a two-part series!

But while I believe W.S. is William Shakespeare, I do not think H.W. is just a random friend, looking at it from an Oxfordian perspective.

(Edward de Vere, the 17th Earl of Oxford at the time of the reign of Elizabeth I, was a well-known incredible poet to the best degree. Oxfordians are people who believe Oxford was Shakespeare. )

And one of the theories is that Oxford was also the biological father of Henry Wriothesley (H.W.). So then it makes perfect sense for W.S. and H.W. to be together.

One might ask, but if that’s that case, wouldn’t it then follow that H.W. is really Henry Wriothesley? On the surface, yes, but if there’s one thing we know about Shakespeare, whoever he is, it’s that he never does anything that’s only surface-level. It is more likely that Shakespeare is the author of Willobie’s His Avisa, and as Oxford, is simply tipping his hat to his son. Which bring me to…

Did you know that the majority of early publications with the name Shakespeare in it, the name is written as Shake-speare? The entire name William Shake-speare to people of the day would automatically make them think of Pallas Athena, known as the spear shaker.  The name William means “gilded helmet”, which she wore. Shake-speare is a pen name.

Likewise, so is Willobie. The name does not appear as an actual person, anywhere. 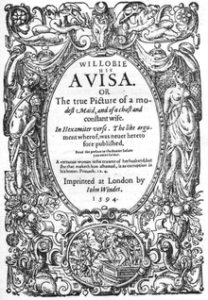 One day I was sitting in a doctor’s office waiting room, and I had a copy of the poem which I put down on a chair next to me. My copy had the name spelled Willoby. The copy was a facsimile of the 1635 edition (the poem as published in 1594).

I stared at the name and sort of broke it down. Will-O-by. Will-O-by. I realized it could be a pen-name that explains who wrote Shakespeare. Will(iam Shakespeare)-O(xford)-by. In other words, Shakespeare is by Oxford. I got really excited, and contacted another Oxfordian, Hank Whittemore. Hank had a facsimile copy of the 1594 edition, but said it was Willobie. I became deflated.

But then I realized it isn’t much different. If you take out “by” and insert “bie”, what you have is an indication not of who wrote the works, but who is (“bie”=”be”) whom.

It’s important to note that the Oxfordians believe Oxford identified himself by inserting “O” where “Oh” should be. There is an entire level of secrecy that was not only warranted, but required. However this is beyond the scope of this article.

As I mentioned, the poem has five suitors. Spanish, Italian, French, German and English. What a curious thing, if the man from Stratford was Shakespeare. He may have understood English culture, but since he did not travel to the mainland, he couldn’t have known about the others.

In 1574, Oxford went to the mainland for a prolonged stay. He spent much time in Italy, some in France and Spain. I’m not sure about Germany.

The Rape of Lucrece

If you’re not convinced by now that Shakespeare wrote this poem, consider this. Willobie’s His Avisa references The Rape of Lucrece in the verses prior to the the poem itself:

While it’s been said that this is the first mention in English literature of the country’s great poet, it is not what I am interested in. According to the timeline tediously made by Charton Ogburn, in September of 1594 Willobie His Avisa was published with an unnamed author. Also in 1594, The Rape of Lucrece was registered and published “later in the year”. Therefore, Rape of Lucrece was most likely published after Willobie His Avisa, or at least at the same time. Which means Willobie’s His Avisa was already written. So the author/poet either had an advanced copy (not likely if Shakespeare lived in Stratford-on-Avon), or they are one and the same authors.

This blog post was originally published 18 hours ago, but u forgot one. Silly me.

After the poem there is a shorter piece of verse called “The Praise of a Contented Mind,” which is signed at the end,

Ever/Never was also used by Edward de Vere to identify himself as the author of the works. Because it his his first initial and last name: E.Ver. The word Never, of course, also has it, just with an additional letter of the alphabet.