Hourglass Museum and the timeless art of life 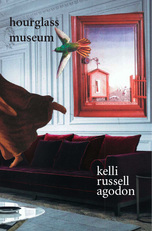 Hourglass Museum by Kelli Russell Agodon appears to be a book of poetry based on art — and it is, but it is also so much more. It is a book about life and its distractions, get-togethers and their conversations and other nuances of everyday life.

In fact, the book can be summed up by its opening poem, which lets the readers in on the secret, the joke, the maddening reality of what life has to offer.

Agodon is a master of enjambment, the turns-of-phrase and metaphorical imagery that begs awe-struck questions like, “Where did THAT come from? How did she come up with THAT?” that may leave poets wanting to take their craft to the next level.

There’s no dessert in the picnic basket,
so I swallowed time.

Or this line, which is simple enough, yet for me it seems Agodon was channeling Ezra Pound.

Because the dress was worn.
Or wasn’t.

The book is a dialogue between art as life and life as art. There is both an unresolved tension between the two as well as an agreement to live in harmony together. But as the book progresses, it becomes less about the former and more about the latter. Agodon investigates questions of womanhood in general as well as motherhood and the family dynamic that is simple inspirational to read due to the way she expresses these themes.

Hourlass Museum is 120 pp and published by White Pine Press.